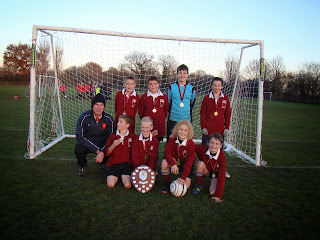 SRH Football team after winning the trophy and medals.
There were 24 teams taking part. Our team won all of the group games to get into the semi finals.
The semi final was a frustrating 0-0 draw despite Fram having most of the chances. The game was decided by penalty kicks. Each team took 4 kicks with Fram winning 3-2 thanks to 2 saves by Zac and 3 good goals by George, Harrison and Ethan . 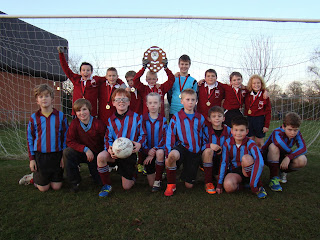 We also entered a B Team into the tournament. They also won a very strong group and progressed to the semi finals. They only lost 1-0 in the last few seconds to Stonham Aspal. The B team(coached by Mr Cantrell and Mr Skeggs) played some excellent football with special mention for the 2 year 5 boys: Oli and Charlie and our girl Amelia - who showed her excellent skills and running ability throughout the tournament.

The final between Fram and Stonham was a high class game. Despite having most of the early chances Fram were caught on the break by a very quick Stonham forward.
Fram batled very hard to get back into the game. With just 5 minutes to go Ethan scored a well deserved equaliser. The match had a dramatic finish. With Stonham on the attack Dylan made a tackle and a superb pass to Ethan who sprinted clear to score the winning goal with less than a minute to go.