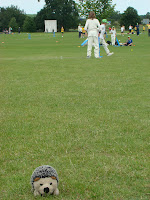 icket Club.
There were 12 schools from around the County. Each team had to play 5 matches before a series of playoffs.
Our results were:
v Lothingland Middle we won by 18 runs
v Breckland Middle we won by 52 runs
v Beccles Middle we lost by 10 runs
v Halesworth Middle (last years National runners up) we won by 2 runs. Our captain Ewan hit the last ball of the match for a huge 6. We needed 4 to win so he was under pressure but managed to stay calm and hit a fantastic shot.
v St Louis Middle (Bury St. Edmunds) we needed to win this game to get to the final. However, we lost a high quality match by just a few runs. It could easily have gone the other way. We dropped a catch and had a really tight run out go against us.
We when played a 3rd place play off against Trimly St Mary Primary. We won this by 10 runs thanks to 3 catches by William and a hat trick off our last over by Josh.
The only 2 teams to beat us (Beccles and St Louis) qualified for the East of England round. We wish them luck and hope that one of them gets through to the National finals. 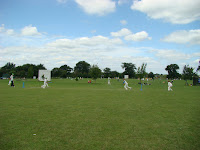 Our team have now played 11 different schools over the last few weeks and won 9 games. They have done really well.
At the county finals they got to meet former England player Nick Night. He saw Ewan hit his 6 and was very impressed with the way that our team played. Nick gave our team a short coaching session and signed their hats. ASDA sponsored the event and gave all of the teams a free hat and t-shirt.

As you can see from the photos - Prickles came along as our mascot and really enjoyed his day out. He got very thirsty and needed one of ASDA's free drinks to refresh himself. 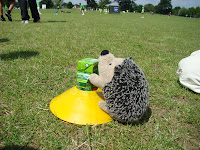 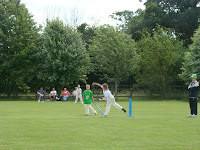 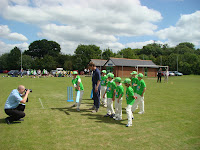 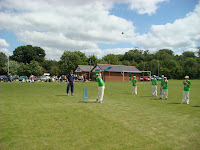 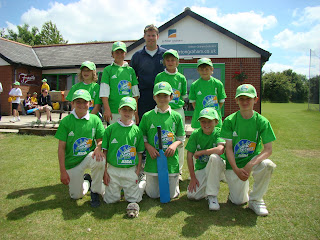