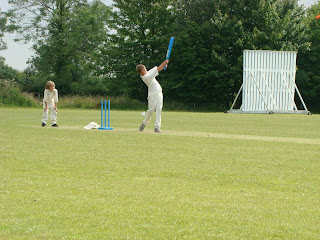 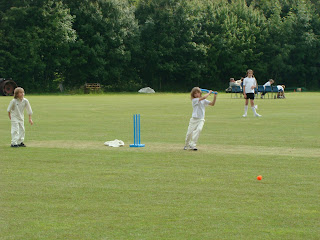 On the 17th of June 2008 a team of nine players went to Worlingworth cricket club to take part in this years Kwik cricket tournament. We played 5 games against Wilby, Wickam Market, Debenham, Occold and Earl Soham. Our team won all of our games and won this stage of the tournament. This win qualified us to play in the county finals next week.
Our first game was against Wickam Market, we bowled 3 wickets and they ended on a total of 218 runs. Then we batted and ended the game with 251 runs to win.
The game we played was against Wilby, we batted first and got to a disappointing total of 226 runs. Our luck carried on when we bowled three wickets to grasp another victory.
The next game we played was against Debenham, we took nine wickets overall with Marcus bowling a fantastic over of 4 wickets in five bowls!!! WOW!!! Our batting started with Danny and Clem batting too fantastic overs to put us into a good lead scoring 1 six and 4 fours in 1 over. Our total score was 270 to beat them by 99runs!!WOW!!
Our next game was against last years winners Occold who had won all of their matches so far and proved a very capable team. We batted first and ended with a reasonable total of 241 runs which put us in a good position to win the game. Then our fantastic bowling came into play to win the game by a 17 runs.
Our final game was against Earl Soham, they batted first and finished of with only 204 runs, then we batted and got a huge score of 301to win by 97 runs.
This gave us 5 wins out of 5 to finish as area champions.

By Marcus and Ewan 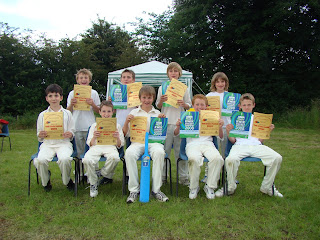