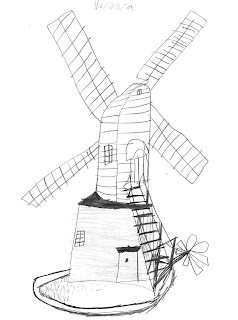 A delightful drawing by Veronica from class LC

Extracts from a big report written by Ollie, also from class LC:

"...in front of the mill, Mr Sullivan introduced himself and told us that he owned the mill.  He told us that when the wind blows the part on top of the roundhouse moves! The stairs going to the top move and that was why there was a track.
One group went up the stairs and the other went into the actual windmill and it moved when they went in it !!!
In the roundhouse there are three staircases, the first floor had a hopper which flour would come pouring out of.  Mr Sullivan said the top of the windmill weighed the same as 15 big tractors.  On the section below there was a little bell beside a hole that you'd drop corn down. On the second floor in the round house were 4 trap-doors and one normal door with no stairs where a truck would sit (outside) for one man to chuck bags of flour up through the door to land in the truck."
Posted by Office at Thursday, March 30, 2017